When it comes to watches, details make all the difference. And when we come to the topic of watch collection, details matter all the more.

As a matter of fact, small differences can make a huge difference in the collectibility of certain watches. For example,

But when it comes to ”mistakes” by the manufacturer, these differences can matter even more. Take, for example, the Rolex Explorer 16550 ”Cream dial”. This is a watch that was originally presented with a white dial. But as a result of defective paint, the dial slowly but surely turned into a cream color.

And because Rolex’s goal is to make perpetual products, as soon as they realized this happened, they discontinued the watch and replaced it with a white dial that didn’t discolor. Today, the Explorer Cream dial is highly collectible and is getting rarer and rarer for every year that passes.

But in this article, we are going to look closer at a different watch with a similar dilemma, namely the Rolex Daytona ”APH” error dial, reference 116520.

You may or may have heard the term before, but as these watches are becoming rarer and rarer, and this detail becomes more acknowledged, sellers, auction houses, and others, are highlighting this unique detail about this 116520 because it is starting to matter more and more for collectors. After all, in many cases, watch collectors are looking for details that stand out and distinguish the watches they buy.

The name actually derives from the ”COSMOGRAPH” printing on the dial. On these versions, this wording is actually printed ”COSMOGR APH”, with a rather unusual and weird spacing between them in the middle of the word. Since COSMOGRAPH is one word, the spacing does not make sense. 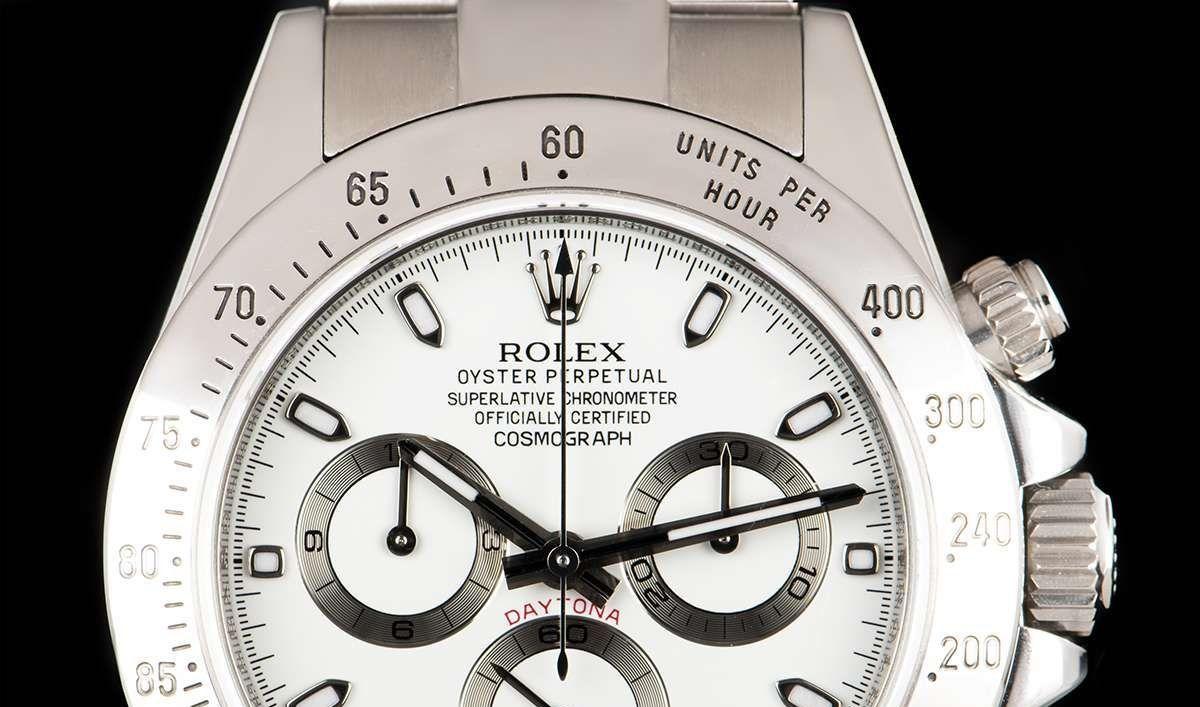 It’s not often that Rolex, a brand of perfection, makes mistakes, and it has been debated whether or not this is one of them. The spacing does indeed look unnatural, but it could also have to do with the font used and the way it was printed on the dial. But whether it was an error or simply a result of footing, we leave it up to you to decide. But regardless, Rolex later changed this to remove the gap and create a more seamless ”CHRONOGRAPH” text, so obviously, Rolex wasn’t completely happy with it.

As a result, the Rolex Daytona APH error dial is a watch that has appreciated greatly in value over the years, and will likely continue to do so. This is also contributed by the fact that more and more people are made aware of this error dial.

In addition, the Rolex Daytona 116520 APH dial was only in production for a few years before Rolex changed the printing, meaning that there are relatively few examples out there, c compared to the total number of 116520s manufactured.

Worth noting is that the APH dial is made both on the black and white versions. In addition to this, all the dials produced over a certain time had the APH dial, meaning that this also goes for the full gold and gold and steel versions as well. In addition, it appears that the white dial is the most common to have this dial printing, and there seem to be fewer black-dialed versions.

As a result, the price for black APH Daytonas has always tended to be higher than that of the white one, but of course, only Rolex has the total production numbers of the respective colors.

According to Phillips, the Rolex Daytona APH dial was only in production between approximately 2011 to 2014, but only Rolex knows the real answer. The estimate is based on research and identifying the APH watches and their production years. It’s also important to have in mind that production time is not necessarily the same as the date of sale, as Rolex retailers may have kept watches in their safes/stocks for years before selling it, which is not uncommon.

But at the same time, it’s important to note that the question of how rare they really are is something that matters. Of course, since it is not possible to get any official production numbers for how big of a percentage of the total 116520 productions that did have the APH error dial, it’s difficult to determine just how rare they are. But at the same time, when it comes to watch collecting, that is actually not what matters.

What matters is that people care about it, and are willing to pay more for it. And if you look at the pricing of these watches, the APH dial versions tend to be priced slightly higher than the non-APH dials. And whilst this difference is not enormous, it has gotten bigger over time, and as long as people continue to value and pay attention to this detail, the difference in pricing will likely become even greater over time.

The fact of the matter is that the Daytona APH dial is a small detail that most people wouldn’t notice. And this also goes for watch nerds and collectors, unless some people would start to emphasize their existence. How much you value these small yet unique detail is completely up to you. But when it comes to watch collecting, it really is the details that make the difference, whilst some are bigger than others.

There are plenty of examples of this in watch collecting, such as ”Swiss only” dials, rail dials, feet first, meters first, etc. but only the market decides how important and collectible these will become.

With that said, the future will provide whether or not the APH Daytona will become a highly sought-after version, or if this detail will be forgotten and neglected. Only time will tell….

We’d love to hear your thoughts! Do you think the Rolex Daytona APH error dial will prove to become more collectible and sought-after in the future?