The Rolex Daytona is unarguably one of the most iconic watches ever made. It has a long and rich history and has been around for decades.

But whilst the model is today mostly known as ”Daytona”, you might have also noticed that Rolex also uses a different term to describe it, namely ”Cosmograph”. But what does this mean? Well, the fact is that there’s quite an interesting history behind it. And a good reason why in addition to Daytona, Rolex also uses the name Cosmograph to describe it.

What does the term Cosmograph mean?

When most people hear the term ”Cosmograph”, they naturally think of ”Chronograph” – a term that is used by most watch brands and manufacturers to describe a watch with a chronograph function.

Today, the term Cosmograph, when relating to the Rolex Daytona can simply be viewed as a different term for ”chronograph”. But there’s more behind the adaptation of the term by Rolex than that.

Chronograph is a Greek word and Chronos means time, and graph (grafo) means ”write”. This is because chronographs are meant to write (track) time.

In a similar way, Cosmograph has a similar meaning: Cosmos means ”world” and graph (grafo) means to write. With this explanation, you can figure out what the term means. Cosmography is also a word of Greek origin and refers to the world and the science behind the universe, including all of the different parts of the science such as cosmography, astronomy, and so on.

Some people believe that Rolex actually invented the term for marketing purposes, and whilst they are the brand that brought it to light in the watch world and adapted it, Rolex did not invent it.

The story behind the Rolex Cosmograph

Today, Rolex’s chronograph is most known as ”Daytona”, however, this is a term that has not always been used for its chronograph models.

The term Cosmograph started to appear on Rolex watches during the 1950s. Specifically, Rolex gave the name to the Rolex Moonphase reference 6062 to describe watches with a moon phase and calendar function. This model featured both a moon phase function and stars on it, so with the above explanation of the term in mind, the name made perfect sense for the model.

The name was used for their moonphase model until 1956 when it was discontinued. But interestingly enough, Rolex decided to keep using the name for its chronograph watches, specifically the Daytona. There’s no official explanation for this, but one potential explanation could be that Rolex thought it sounded better to use ”Cosmograph” instead of ”Chronograph”. Using a different term would also help Rolex differentiate itself from its competitors. And by now, Rolex is probably the company that is the best at giving names to its different parts, models, and designs to make them stand out, including terms such as Oysterflex, Oystersteel, Everose, and so on…

In 1953, Rolex Rolex registered the name Cosmograph and as has been said, Rolex used the simple “Chronograph” under the name on the standard 2 sub-dial models.

The early Rolex Daytona watches did not actually feature the name ”Daytona” on the dial, but rather Cosmograph. In addition, all Rolex chronographs from this era (around 1960s to 1970s) featured the name ”Cosmograph” on the dial, but not all of the ones featured ”Daytona”. This is an interesting detail because technically, Cosmograph can be seen as the original and correct name for the model.

It was in 1965 that the first Rolex Cosmograph watches started to feature ”Daytona” on the dial. This was due to a growing interest in racing and motorsport. And during this time, the Daytona beach race track was considered one of the most prestigious race tracks in the world. But in the following years, the Daytona name would not always come to be printed on the dials. For example, some Cosmographs reference 6240 exists with a so-called ”prototype” dial which has a small ”Daytona” printing below the Rolex logo. Others have Cosmograph Oyster, and others have only ”Cosmograph” printed. This just goes to show that it was a period where Rolex experimented a lot and was debating on how the brand would move forward with the ”Cosmograph” and ”Daytona” names.

In 1966, Rolex became the official timekeeper at the Daytona race track (known as Daytona International Speedway) and it was during this time that Rolex doubled down on the name Daytona to capitalize on the prestige of the track and the records that were set there. And of course, to highlight their close relationship with this iconic race track.

Following this, Rolex’s chronograph watches would eventually be promoted and known as ”Rolex Daytonas”, not Cosmographs, although Rolex never abandoned the original name, which can be seen on all Rolex Daytona watches still to this very day.

In Rolex’s own words:

”Introduced in 1963, the Cosmograph Daytona was designed to meet the demands of professional racing drivers. It is an icon forever joined in name and function to the high-performance world of motorsport. More than 50 years after its creation, the Cosmograph Daytona remains in a class of its own among sports chronographs and continues to transcend time.” 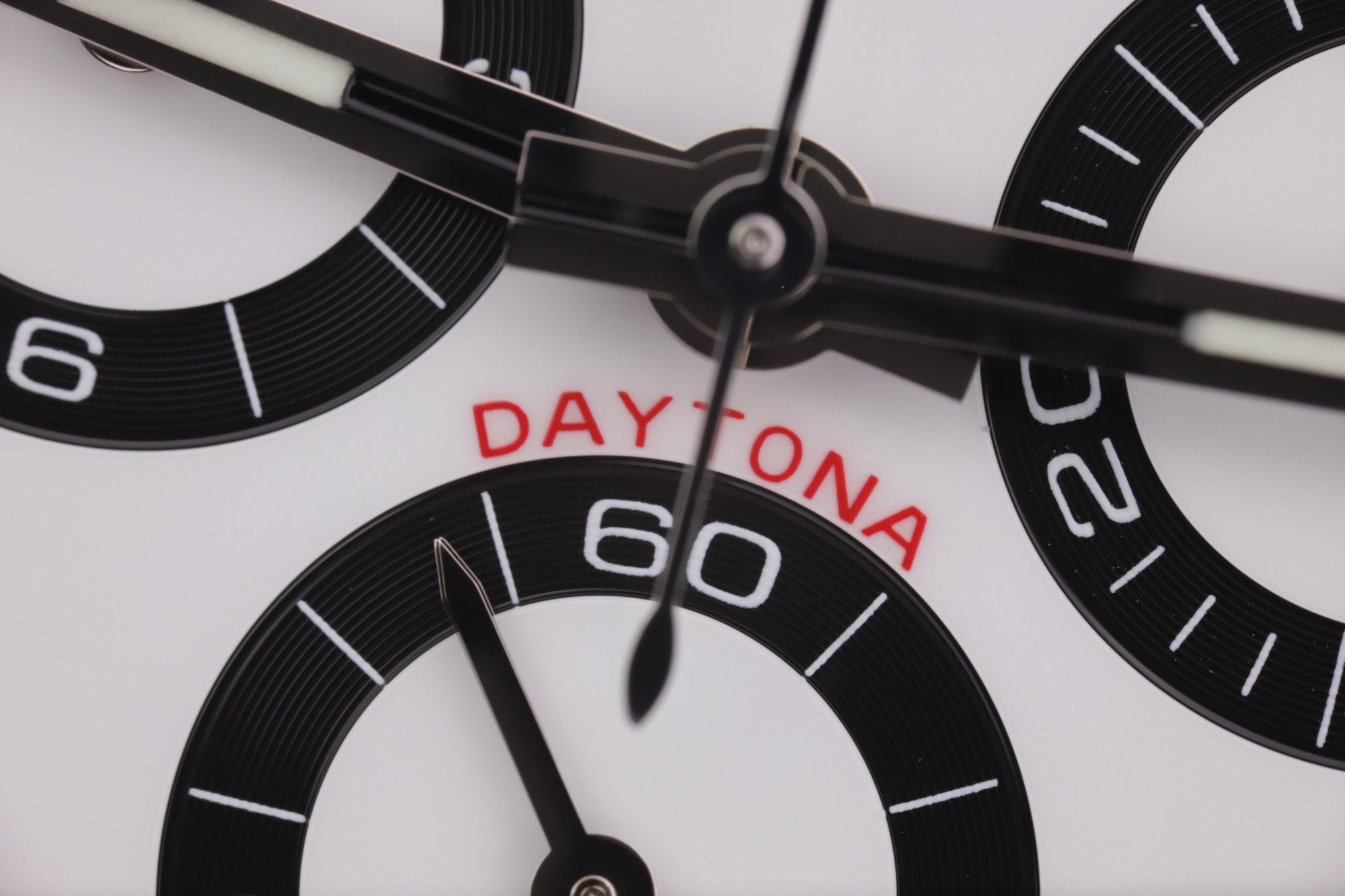 The above quote from Rolex is of great relevance because to be correct, the first ”Cosmograph” was introduced in 1963. The Daytona printing would, as mentioned, not be introduced until around 1965, and it would take more than a decade for the Daytona name to be fully adapted to all Cosmograph models. But this just highlights the fact that in Rolex’s eyes, Cosmograph and Daytona are essentially the same things – although it can be argued that the Cosmograph name goes much farther back than that (although in a different shape and form).

Cosmograph is often associated with Chronometer, but it is important to point out that these are not the same thing. Whilst Cosmograph is the term that Rolex nowadays uses instead of ”Chronograph”, Chronometer is something completely different.

But still, it’s easy to see why these tend to be mixed up because on the dials of Rolex Daytona watches today, you find the text ”Cosmograph” but also ”Superlative Chronometer”.

Chronometer is simply a designation that refers to the accuracy of the movement. In order for a watch to be designated as an official chronometer, it needs to pass the tests of accuracy and performance of COSC (Contrôle Officiel Suisse des Chronomètres, which is the Official Swiss Chronometer Testing Institute, responsible for certifying the accuracy and precision of Swiss watches).

Rolex takes this testing one step further by also testing its movements themselves, after having been tested by COSC, to achieve greater accuracy, this is what makes them ”Superlative Chronometers”.

For perspective, Rolex’s requirement for superlative chronometers is 2/+2 seconds per day, after casing, whilst COSC’s standard is -4/+6 per day for uncased movements.

A non-official theory about the name Cosmograph that is not confirmed (but could be true), or at the very least, is an interesting myth, is that the Rolex Cosmograph name has a connection to space.

During the 1960s, space exploration and specifically going to the moon was probably the coolest thing you could do, and the anticipation for going to the moon was huge. Many watch brands, later on, competed about becoming the official watch of NASA, including brands like Bulova and of course Omega.

The name Cosmograph obviously has a relevant connection to space and the theory is that Rolex aspired to make it an official watch that would be given to astronauts. When this didn’t happen and Omega came there first, Rolex introduced the name ”Daytona” to make it a watch for racing instead. The theory is supported by the fact that the Daytona name was introduced in the mid-1960s, which is when Omega became the first watch in space, followed by competition amongst watch brands to become the first watch on the moon in 1964.

But again, this is just a theory…